Veterans Day | Saturday, November 11
Eric Abts
Platform Support - Application Analyst
Southern Company Services
My father, David G. Abts, served in the US Navy during the Korean War. He had a fearless and unstoppable approach to every challenge in life he was presented with, numerous of them being the types of challenges that many of the people in this world would not be willing to take on. Our family remembers him almost weekly by my kids and I taking hikes up to the Alabama Veterans Memorial Park and placing stones & wild flowers around the step-stone he has at the park with his name and rank when honorably discharged from service. 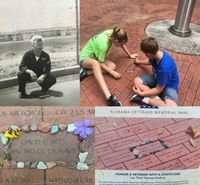 Suzan Adderholt
Accounting Systems Manager
Alabama Power Comapny
I would like to say thank you for your service to our great country. God Bless
Kim Adelberg
Director Energy Trading
SCS
Thank you for your service to our country and for protecting our freedom. As the daughter of an immigrant I do not want to ever lose sight of just how special our freedom is in the United States. It is a privilege that many throughout the world do not enjoy. Thank you to all veterans for protecting that freedom and letting my children and me enjoy that privilege.
Cathi Alford
Secretary Sr.
Southern Company Services
Words are not adequate to express the gratitude I feel for the service and sacrifice that our veterans and armed forces have made for our precious country. Mostly, I want to say thank you for defending our shores so that we do not fight our enemies in the homeland. God bless you and your families for answering the call that others of us did not have the courage to answer.
Curt Alfrey
Cyber Security & Calibration Lab Coordinator
Farley Nuclear Plant
Serving our country was so important to Curt, that even since a little boy he thought of nothing else. As a child, all drawings were of tanks, missles and planes. His school book reports were of anything that flew or military telated. He was so motivated, that even having open heart surgery at age 9 did not stop him. When the Air Force told him they would not accept him, due to his prior surgery, he refused their answer and pressed forward. His high test scores and "persistent insistence" gained him entrance where he served our country for 6 years during the 911 era.

Thank you Curt for your dedication and love for your country. And not allowing the word "no" to discourage you. I could never express in words how very proud I am of you, but this is my effort to do just that!

Rob Anastasio
Metering Services
Georgia Power
I will never know all of the sacrifices you have made for our country but thank you for all of them. You are appreciated
Sadie Anderson
Internal Controls and Compliance - Intern
Mississippi Power Company
I have two family members who were in the armed forces. They survived multiple deployments with no physical injuries but both now have PTSD. I could not imagine being away from my loved ones long enough to protect them in such a way that our troops do. So, thank you so much to everyone who has served. Also, thank you to the family and loved ones of the troops because you all bare a heavy burden as well. Our country is indebted to you.
Lynn Archer
Maint Sp
GPC
Just want to say "Thank you".
Erin Autrey
Property Accounting Manager
Alabama Power
We can never fully thank you for the service and sacrifice that all of you and your families have made and continue to make. I'm proud and honored to work with you each and every day. Thank you for serving and allowing my family and me to continue to enjoy our freedom.
Alexandra Avera
Co-op
Southern Nuclear
I will always take the time to thank veterans and their families for their service. I was born and raised in a military family. All of my grandfathers served, one in the air force, one in the army, and one in the navy. I currently have an uncle serving on a nuclear air craft carrier, and my father is currently in Afghanistan with the 3rd ID out of Ft. Stewart, Georgia. This is his 2nd time in Afghanistan and fourth time having a 10+ month deployment. Some of my worst memories growing up are from saying goodbye to my father, but to this day my absolute FAVORITE and happiest memories are always the ones of welcoming him back home. This picture I am sharing is from his most recent promotion to Lieutenant Colonel in July. It's a bittersweet moment captured here because he was promoted and we were incredibly proud and happy for him, but we knew he was leaving us for Afghanistan a week later. We have learned as a family to not dwell on the negatives though and to focus on the positive impacts and thrive on those while he is gone. We know that as much as we lean on him to protect and serve our country, he leans on us to maintain our positive attitudes and not give him something to worry about. I know first hand the types of sacrifices it takes for both the veteran and their families. I cannot thank them enough for everything they have done for us. 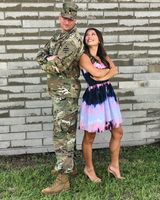 Yvonne Avila
Project Manager
Engineering & Construction Services
My brother-in-law, who serves in Special Forces, was on deployment in 2011 when I was diagnosed with breast cancer and going through chemotherapy. During that difficult time I received these photos from him and his team. I can't tell you how much it meant to me and still does. I am so proud to call him my brother and so proud of the way he serves and supports our country and our family. With all my heart, thank you "Tio Tito!!" I love you. (He is the fifth one in from the left shown in the picture.)

Stephen Baggett
Program Manager
SCS
Special thanks and deep gratitude to our veterans. I echo Tom in the observation that those who have served our country exemplify a model of leadership and excellence as they conduct their duties at Southern Company. I look to you with great respect and am proud to work alongside you. Thank you for your commitment and sacrifice to our country. Though not always verbalized, it is recognized, appreciated, and not taken for granted.
alexus barreto
CSR rep
southern company gas
Thank you for your service. I appreciate you!
Judy Bates
Assistant Plant Control Operator
Alabama Power
Thank you for your service and the sacrifices made by you and your families.
Bryan Batson
SVP Southern Operations
Southern Company Gas
My message is thank you to all past, present and future service members. We have the freedom and the country we do today because you sacrificed much and many sacrificed all for our country. My favorite vet is Al Long, a 94 year old WWII vet, who served in the European theater as a airplane mechanic. His stories are priceless(including meeting Patton). This photo was at his birthday party and he plans to have many more. He can still wear his uniform. So thanks again Bryan 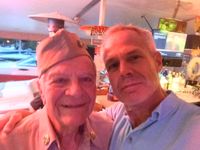 Errin Beard
Construction Engineering Specialist- Sr
E&CS
Many of my family members were in the military and I grew up with a strong respect for our military and our flag. My family and so many others have sacrificed and given their all so that we can be free. I want to thank all veterans and current military and their families for their sacrifices and I have the utmost respect for each and everyone of you.

Chris Bivins
Drafter
E&CS
Thank You all so much for yours and your families service. You all gave us so much.
Michael Blair
Engineer I
Alabama Power
Not a day goes by that I do not see my family and thank God for the people who valiantly protect our nation. We are so fortunate to live in a country where so many volunteer to put the rest of their country before themselves. I've had the privilege to work with several veterans on a daily basis, and my hope is that I can honor them and serve them in my role as a small thank you for their service.
Jackie Blakley
Director, EPC
Southern Power
As a wife of a veteran of Desert Storm, I am truly thankful for the sacrifices that so many of our employees and spouses of employees have made to preserve our country's freedoms that we all enjoy. May you celebrate this holiday season with family and friends and be reminded of our sincere gratitude.
Glenn Boatwright
Distribution Construction Analyst
Georgia Power
.Sun Tzu was a Chinese general, military strategist, and philosopher who lived in the Spring and Autumn period of ancient China. Sun Tzu is traditionally credited as the author of The Art of War, a widely influential work of military strategy that has affected both Western and Eastern philosophy
Sun Tzu
"Regard your soldiers as your children, and they will follow you into the deepest valleys. Look on them as your own beloved sons, and they will stand by you even unto death!"
Thanks to all of our veterans. The greatest thing I learned in my 20+ years in the US Navy is the power of TEAM work!